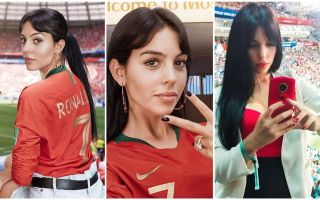 Cristiano Ronaldo’s World Cup may have come to an end earlier than he hoped, but Georgina Rodriguez is undoubtedly on hand to cheer him up.

The 33-year-old and his Portugal teammates fell to defeat in their last-16 clash with Uruguay, ensuring that they weren’t able to follow up their triumph at Euro 2016 with the World Cup crown too.

However, Rodriguez seemingly enjoyed herself in Russia based on these snaps, as she showed off her new app and provided us all with a treat as a result.

Always on hand to support her other half, the Argentine-born beauty is clearly willing to put her own allegiances aside to back her man.

With speculation rife over his club future though as Ronaldo continues to be linked with a sensational move to Juventus this summer, it remains to be seen if Bianconeri fans will be seeing her wear the famous black and white jersey in Turin next season…