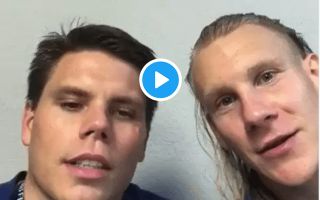 Croatia centre-half Domagoj Vida has played a pivotal role in his side’s run to the 2018 World Cup semi-finals, but he could now reportedly be in trouble with FIFA.

The 29-year-old has played in four of Croatia’s five games in Russia so far this summer, as they now prepare to face England in the last four on Wednesday night.

However, his participation in that game has seemingly been placed into doubt, as ESPN report that FIFA are looking into the video below, which shows the defender shouting: “Glory to Ukraine” which has been interpreted as being in reference to the tensions between Ukraine and Russia.

Political statements are not allowed to be made or displayed as per FIFA rules, as Switzerland duo Xherdan Shaqiri and Granit Xhaka found out after their win over Serbia as they were both hit with a hefty fine, as noted by The Guardian.

In turn, it remains to be seen whether or not Vida faces a similar punishment or something more strict, as he’ll now face an anxious wait for FIFA’s verdict to determine whether or not he’ll be available to play for Croatia against England with The Sun raising doubts over his availability and noting how he has since claimed that it was merely meant as a joke.

Given it happened in the dressing room and not on the pitch, time will tell if Vida is still hit with the blowback from the governing body with the host nation likely to be far from impressed.

FIFA failed to take proper action against Shaqiri & Xhaka. Will it now? #CRO player Vida and scout Vukojevic shouting out “Viva Ukraine” (Ukrainian soldiers’ cry) and “This victory is for Ukraine” after beating #RUS