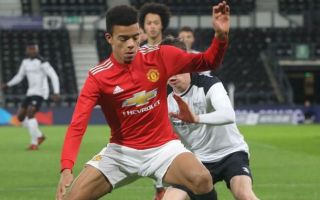 Manchester Utd starlet Mason Greenwood is set to be promoted to Jose Mourinho’s pre-season squad, according to the Manchester Evening News.

The 16-year-old striker will be given the chance to shine after a prolific season where he scored 17 goals in 17 appearances for United’s Under-18s and will be training with the first team this week.

As per The Metro, the Old Trafford outfit will travel United States to begin their pre-season schedule and will be based at the UCLA campus in Los Angeles.

According to the MEN, Greenwood’s selection is due to the absence of Romelu Lukaku and Marcus Rashford in the World Cup for their respective countries.

Lukaku has shined for Belgium in Russia scoring four goals, whilst Rashford has been a regular feature from the bench for Gareth Southgate’s Three Lions.

According to the Evening Standard Anthony Martial is on Chelsea’s transfer radar this summer and the report from the MEN states that his agent said the forward wants to leave last month – therefore the highly-rated striker Greenwood may have a chance to stake his claim to be a part of the first-team for the upcoming season.