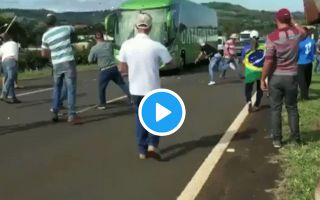 After their World Cup journey ended in the quarter-finals in Russia, it’s fair to say that the Brazil squad didn’t get the welcome home that they wanted.

Tite’s men appeared to be improving as the tournament went on as they came through the group stage unscathed before seeing off Mexico in the last 16.

However, after a nightmare opening 45 minutes against Belgium, they weren’t able to recover to extend their run and bowed out of the World Cup at the quarter-final stage.

Given their history in the tournament as five-time winners, Brazilians ultimately demand success from the national team every four years. While they endured a different type of nightmare on home soil in the last tournament, many were evidently furious with the way they exited in Russia too.

As seen in the video below, the team bus was carrying the players home after arriving back in Brazil, but they were met by a small angry crowd somewhere en route to their destination who proceeded to pelt the bus with eggs, as noted by AS.

It just goes to show the standard expected from the Selecao as Neymar and Co. ultimately didn’t deliver this summer.

How Brazil welcomed their team. I would hate to be the guys in the bus??? but at least they got paid.?? pic.twitter.com/msjxFGodbf