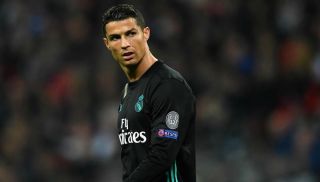 Juventus are reportedly on the verge of completing the sensational signing of Cristiano Ronaldo from Real Madrid, as per reports in Italy.

The 33-year-old cast doubt over his future with the Spanish giants immediately after their Champions League final triumph against Liverpool in Kiev back in May, as per Goal.com.

In turn, that has led to ongoing speculation over his club future while he was with Portugal at the World Cup in Russia, but with his tournament over, talk over an exit from Real Madrid has seemingly ramped up again.

Respected Sky Sport Italia journalist Gianluca Di Marzio has now even claimed that Juventus ‘are very close’ to securing a €100m deal to sign the Portuguese superstar, and has suggested that it could be a matter of ‘two or three days’ before the details of the transfer are sorted out.

It remains to be seen if that timeline holds up, but ultimately the strength of the rumours would suggest that Ronaldo is nearing the exit door at the Bernabeu to significantly bolster Massimiliano Allegri’s squad ahead of next season.

Further, as per Calciomercato, Juve chairman Andrea Agnelli has travelled out to Greece where Ronaldo is currently on holiday to continue discussions and move closer to completing a deal while it’s added that his agent, Jorge Mendes, is also expected to join them.

However, success in the Champions League has continued to elude them, and so while Ronaldo would undoubtedly help continue their reign at the top of Italian football, he could be the missing link to making that last step in Europe too.

That’s what Juve will hope at least if a deal is confirmed this summer, but with the movement noted above involving key figures in the deal, it would suggest that Ronaldo moving to Turin is now a very serious possibility and perhaps even merely a matter of time.

According to Sportitalia, this is #Juventus President Andrea Angelli’s helicopter arriving at the Greek resort where #CR7 is on holiday: https://t.co/TUzgEvfYCY #RealMadrid #POR pic.twitter.com/wgqBOS9QLe

Cristiano Ronaldo is so close to Juventus! Today meeting between Real Madrid and Jorge Mendes, but Mendes told to Juve that Florentino will let CR7 leave Real! And Mendes also told the €100M bid from Juventus will be accepted by Real Madrid soon. ?????? #transfers #CR7