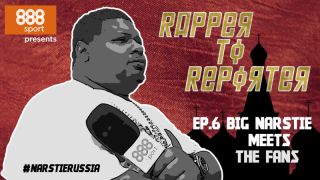 The sixth episode of Big Narstie’s seven-part Rapper to Reporter journey with 888sport is here.

In episode 6, Narstie goes behind enemy lines, interviewing fans on the street and within a German beerhouse in London, to soak in the fan atmosphere as England headed into the knockout stages of football’s biggest tournament.

His interviewing technique is unorthodox, but under the guidance of Chelsea FC Fan TV’s Sophie Rose, Narstie quizzes fans from England, Belgium and Germany on their nation’s support during the tournament, plus answers some of life’s wider questions over a beer and a frankfurter…