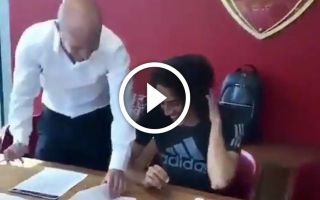 Arsenal are having a busy summer as they look to bolster Unai Emery’s squad, and the video below would suggest that they’ve secured another signing.

Further, the report goes on to add that French youngster Matteo Guendouzi was set to undergo a medical with the Gunners to make it five new additions, but it seems as though the signing of the 19-year-old has gone further than that.

The official Arsenal Twitter page has yet to make any reference to a deal being done for Guendouzi, but as seen in the video below which has been leaked on social media, it appears to show the talented Lorient starlet signing his Arsenal contract with club officials and the badge in the background.

It remains to be seen when the club will officially confirm the deal, but it looks as though Emery has added another midfielder to his squad as he continues to strengthen the team ahead of his first season in charge at the Emirates.

Arsenal had the worst defensive record of the top seven sides in the Premier League last season, and so that combined with the attacking quality already at Emery’s disposal, it seems like a sensible strategy to prioritise strengthening the defence and midfield this summer.

DONE DEAL: Matteo Guendouzi has completer his move from #Lorient to @arsenal on a 5-year deal worth £7m! pic.twitter.com/z2ZtTieMsd