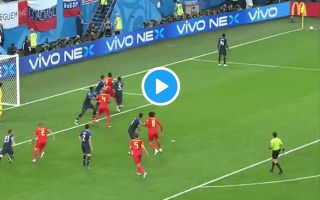 France and Belgium produced an entertaining opening 45 minutes in their World Cup semi-final on Tuesday, but it was a tale of the two goalkeepers to keep it goalless.

Both sides had their moments and looked dangerous going forward, but neither could find a breakthrough as they eye a spot in Sunday’s final.

That was in large part to Hugo Lloris, who produced the sensational save seen in the video below to deny Tottenham teammate Toby Alderweireld, with the defender’s effort appearing to almost pass him before he pushed it wide.

Rival Thibaut Courtois answered with his own brilliant stop to deny Benjamin Pavard though, with neither side able to break the deadlock in the opening half.

Nevertheless, with Kylian Mbappe, Eden Hazard and Antoine Griezmann threatening, both sides will be confident of eventually finding a way past an in-form Lloris and Courtois.