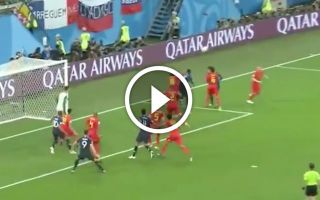 Both sides created chances in the opening 50 minutes of the encounter, but neither could take their opportunities leading to a tense affair with a place in Sunday’s final at stake.

However, the breakthrough eventually came as Umtiti made a dart to the near post and flicked his header towards goal and via what appeared to be a touch from Marouane Fellaini, the ball nestled into the back of the Belgium net as France took the lead.

Set-pieces have undoubtedly been key throughout this tournament and while France weren’t able to find their top gear against Roberto Martinez’s side, they were able to rely on the Barcelona centre-half to step and head home what could be a crucial goal to pile the pressure on their rivals.

As seen against Japan in the last-16 though, Belgium certainly can’t be written off as they’ve proven their ability to respond well and bounce back from adversity.

Umtiti heads it in! #WorldCup pic.twitter.com/GAExCSXl64

Goaaaaal for France ??
Samuel umtiti with the header from the corner
The blues lead against the Red Devils #?????_??????#FRABEL pic.twitter.com/fTa5KgwzFM

Umtiti with the best celebration this World Cup ?? #FRABEL pic.twitter.com/mC3yq9PYEd