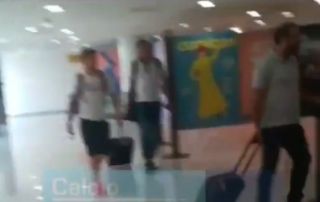 Napoli midfielder Jorginho appears to have been spotted boarding a flight to London today as he prepares to seal a transfer to Chelsea.

It’s being widely reported that the Italy international will follow former Napoli manager Maurizio Sarri in making a summer move to Stamford Bridge.

One of the finest midfielders in Europe, the signing of Jorginho makes a lot of sense for Chelsea’s needs in the middle of the park after a host of poor recent additions in that area.

The video below claims to show Jorginho boarding a flight to London, while a tweet earlier today from Fabrizio Romano claimed the player was heading to the Blues for £50million, alongside manager Sarri.

And so here we go… Sarri is ready to join Chelsea as new manager on next hours! Jorginho will be in the deal and will prefer Chelsea ahead of Man City. ???