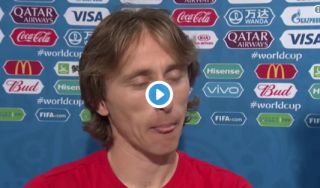 The Real Madrid star was in inspired form for his national team to make it to what is yet another final for him personally, but the first appearance at the World Cup final for Croatia.

This is no doubt an incredible achievement for a nation of just 4 million people, and the 32-year-old was understandably proud afterwards, particularly as he felt many had written his team off.

Some in the English press were full of optimism that Croatia would be tired after having to play extra time and penalties in their last two knock-out games, and in the video interview below he called on them to be more humble in their analysis of their hopes.

"English journalists, pundits from television, they underestimated Croatia tonight and that was a huge mistake. All these words from them we take, we were reading and we were saying 'ok, today we will see who will be tired'" pic.twitter.com/Rxyv4WA03c

Modric won the Champions League final with Real Madrid at the end of May, and if he can help Croatia secure another big upset against France this weekend, many feel he should be in the running for the Ballon d’Or this year.