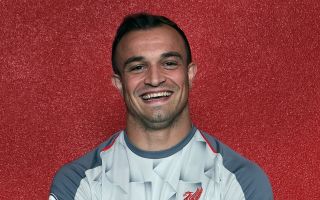 Xherdan Shaqiri was unveiled by Liverpool on Friday night after completing his move from Stoke City.

As is the norm these days, the 26-year-old was introduced to his new fans via a Twitter video.

Shaqiri is well know for his remarkably stocky body shape and Liverpool decided to film him topless.

As the short video went on Shaqiri was seen dressing himself in the new Liverpool home kit as his image sharpened into focus.

The video was well received by many supporters – as some of the tweets below illustrate.

After introducing him through the video, Liverpool’s media team quickly posted lots of photos of their new man.

Shaqiri cost Liverpool a £13m transfer fee, according to The Guardian.

"I can’t wait to see the fans. I hope we can have a lot of beautiful moments in the coming years." ?@XS_11official's interview in full: https://t.co/nQDZR2z6QM#XS23 pic.twitter.com/c5hqgirxPX

I love a bargain!! Our team though, Jurgen is going to be spoilt for choice!?

You know XS23 is a squad player, he is one needed deep in squad and under klopp the guy might get to another level, watch beyond the name my friend this is a great signing for the team overall.