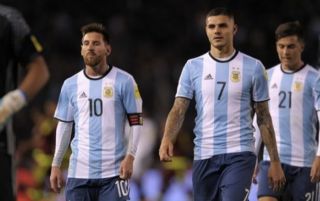 Real Madrid are eyeing up a move for Inter Milan and Argentina stirker Mauro Icardi should they fail to bring PSG and Brazil star Neymar to the Camp Nou this summer.

This is as per Don Balon, who are stating that the French giants don’t want to sell their star man this summer, and thus Los Blancos are eyeing up a number of alternatives should Neymar star in Paris, with one of these being Icardi.

The news outlet are also stating that the Spanish giants are eyeing up Icardi, as well as Eden Hazard, Kylian Mbappe and Harry Kane as alternatives should they fail to land Neymar. That’s not a bad set of options if we do say so ourselves!

Don Balon have stated in the past that Inter value the player at €110M, a fair price for a player who certainly knows where the goal is.

Since joining the Nerazzurri from fellow Italian side Sampdoria in the summer of 2013, Icardi has managed to develop into one of Europe’s best and most clinical forwards.

The Argentine international has managed to clock up a total of 107 goals and 23 assists in 182 games, a phenomenal record considering the player isn’t exactly playing for one of the world’s most creative sides.

Signing Icardi would definitely soften the blow of Real losing out on Neymar, and would give the club a forward class attacker up front for the foreseeable future.