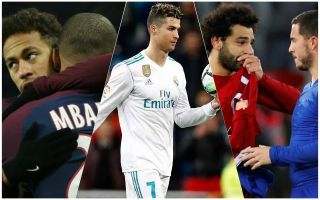 The Portuguese captain is now set to embark on a new chapter in his career with Juventus in a deal worth in excess of €100m as per the official statement on their website.

He has won four Ballon d’Ors with Real Madrid and won the Golden Boot three times also, so who are who are the top 5 players to replace Cristiano Ronaldo?

Real Madrid will have to find a player of enormous stature and talent to fill the void left by Ronaldo who scored 450 goals in 438 games making him Los Blancos’ greatest ever goalscorer – which is 150 goals more than Raul who played for Los Blancos for 16 years.

Neymar and France prodigy Kylian Mbappe are the top two names being touted as possibilities for Real Madrid president Florentino Perez, however, Chelsea’s Eden Hazard could be more attainable options given the PSG duo only signed last year.

And according to the Daily Star, the Belgium captain is the favourite to replace Ronaldo at the Santiago Bernabeu.

Hazard has dazzled during his time in England winning two Premier League titles and the FA Cup too.

The playmaker has been one of the best players in the world and seems to meet the criteria set to don the famous white shirt.

Mohamed Salah would also fit the bill after a brilliant season for Liverpool where he scored 44 times, however, like Tottenham’s Harry Kane, both recently signed a new deals.

As reported by Calciomercato, Robert Lewandowski is also a potential name being rumoured to leave also, despite The Sun citing reports in Germany claiming that Lewandowski will be going nowhere this summer.