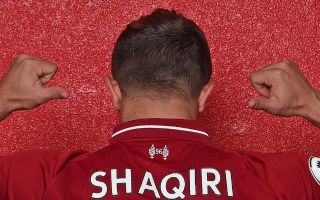 Xherdan Shaqiri became Liverpool’s third major addition of the summer on Friday when he followed Naby Keita and Fabinho in moving to Anfield.

Shaqiri joins the Reds after a modest World Cup campaign with Switzerland in Russia, where he wore the No 23 on his back.

And he will wear No 23 again after Liverpool allocated him the same jersey.

Pulling on the Red. ??#XS23 pic.twitter.com/ebYu5PqbdR

Shaqiri has long been Switzerland’s No 23, but this season will be the first time he has worn it at club level.

Liverpool’s No 23 jersey has plenty of history. Legends Robbie Fowler and Jamie Carragher have both worn it during the Premier League era.

Former defender Carragher responded to the news of Shaqiri’s arrival by posting an amusing message to Instagram.