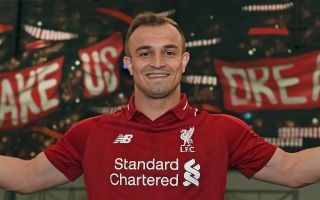 Liverpool have completed the signing of Switzerland playmaker Xherdan Shaqiri from Stoke City.

According to respected Liverpool Echo journalist James Pearces, the Reds have paid a £13m transfer fee, while the player has penned a five-year contract.

The terms of Shaqiri’s deal have not been officially released but earlier this month transfer expert Ian McGarry suggested the 26-year-old would likely earn £120,000 a week at Anfield.

#LFC confirm the £13million signing of Xherdan Shaqiri. He has penned a five-year contract.

If the top end of that estimate is accurate, Shaqiri would stand to earn £6.24m each year and just over £31m over the duration of his deal.

Earlier this month Mohamed Salah penned a new long-term contract at Anfield, which The Express claimed was worth £200,000 per week.

Shaqiri is expected by many to act as Salah’s understudy this season. Both players are left-footed and ideally suited to played on the right side of Liverpool’s attack.