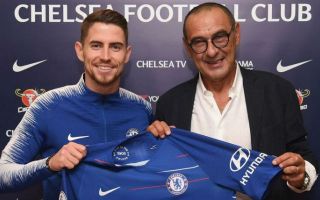 Chelsea have been busy today and have announced the arrival of Jorginho, according to the club’s official website.

The midfield star joins new manager Maurizio Sarri from Napoli and he is looking forward to starting life in west London.

As per the Chelsea website he said:  ‘I am absolutely ecstatic to be here at Chelsea. It is not easy to become part of such a big team so I am very, very happy. I am excited to play in such an intense league, for a team that gives everything to play and win.’

Club director Marina Granovskaia added: ‘We are delighted Jorginho has chosen to join Chelsea. He was one of the most coveted midfielders in Europe and will become an important member of the playing squad. He has demonstrated his quality working under Maurizio Sarri and we are convinced his signing will help bring further success to Stamford Bridge.’

The Brazil born star will don the No.5 shirt for his new club and impressed for Napoli last term.

The midfield metronome is one of the best deep-lying midfield creators in Europe and scored two goals in Serie A last season, creating 44 chances with four assists and embodies Sarri’s high-tempo style.

The potential new signing will hope to improve Chelsea’s goals tally next season as they finished with 62 goals in 38 Premier League games last season – which is the lowest scoring tally of the top six sides.

The arrival of the midfielder, coupled with new manager Sarri shows that the Blues are ready to mount a challenge for the Premier League and a top four place.