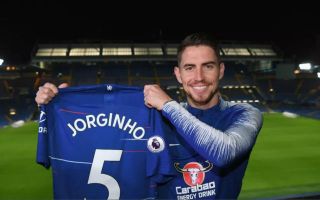 As well as new manager Maurizio Sarri’s arrival this morning, Chelsea have announced the signing of Jorginho, according to the club’s official website.

The Brazil born star will don the No.5 shirt for his new club and impressed for Napoli last term.

As per Sky Sports, the Italian international has signed a five-year deal at Stamford Bridge with Sky Sports news believing that the fee will be a total of £57 million with the Premier League giants.

Jorginho was one of Europe’s most coveted midfielders and Premier League champions Manchester City were also said to be in the hunt for his signature, according to the Metro.

The midfielder has been capped eight times for Italy so far and is best known for his accuracy and ability to run games from midfield.

In what started as a very quiet summer for the Blues, the arrivals of Sarri and Jorginho will give Chelsea fans a sense of optimism for the new season as they hope to break into the top four again.