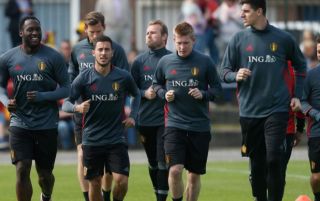 Romelu Lukaku has potentially dropped a huge hint about Thibaut Courtois’ future at Chelsea after the player went live on Instagram following Belgium’s win over England on Saturday.

Following his side’s 2-0 win over the Three Lions, Lukaku went live on the social media site, in which we saw the Man United forward ask Courtois where’s he going this summer.

The Chelsea star then replied that he’s going back to London, to which Lukaku responded to by giggling, something that could suggest the Blues shot-stopper may not be telling the truth on this one.

Courtois didn’t have the best of campaigns for the west London side last season, with his performances in the Premier League being one of the reasons as to why the Blues only managed a fifth-placed finish.

If Lukaku’s behaviour is anything to go by, we may very well see the west London club have to dip into the transfer market to sign a replacement goalkeeper this summer.

Wherever Courtois ends up, the club are sure to have a fantastic goalkeeper on their hands despite the player’s somewhat average season for the Blues last year. Watch this space.