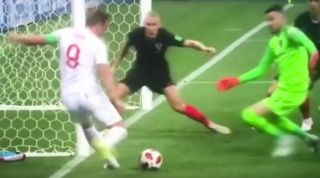 England were brilliant for 45 minutes in Wednesday’s World Cup semi-final but only had a 1-0 half-time lead to show for it.

Many blamed Tottenham striker Harry Kane for missing a sitter which would have made it 2-0 and probably sent the Three Lions marching towards Sunday’s final. Kane was denied by Croatia goalkeeper Danijel Subasic one on one before failing to hit the target with the rebound which he struck into the post. But did he actually miss the target?

A super slo-mo replay has since shown that Kane’s second shot was in fact on target but somehow Subasic got back to block it with his foot. WOW!

I’ve only just realised this was actually a save. Give Subasic the Golden Glove now imo #WorldCup #CRO https://t.co/Rjj6pR2XM5

Kane looks set to end the tournament with the Golden Boot despite failing to convince everybody that he has had a good campaign.

Nobody needs convincing about Subasic’s brilliance though. The AS Monaco No 1 kept clean sheets against Nigeria and Argentina in the group stage, before helping Croatia beat Denmark and Russia on penalty shootouts.