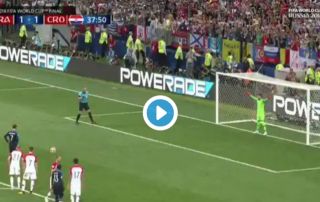 Antoine Griezmann tried his hand at goalscoring for France this afternoon as he scored a penalty to put his side 2-1 up against Croatia in the World Cup final.

The Atletico Madrid was provider for Les Bleus’ first goal, as his free-kick was turned into the Croatian net by Mario Mandzukic.

The forward then bagged a goal of this own, as his slotted home a penalty that was awarded thanks to the brilliance of VAR.

The goal now means that Croatia have it all to do this afternoon if they’re to claim their first ever international trophy.

Here’s a clip of Griezmann’s calm and collected penalty. What a star he’s been for the French this summer!

France are back in front! Cool as you like from Griezmann. #WorldCupFinal pic.twitter.com/E2TIXeYGm4

GOAL ?? @AntoGriezmann regains the @FrenchTeam lead from the penalty spot!