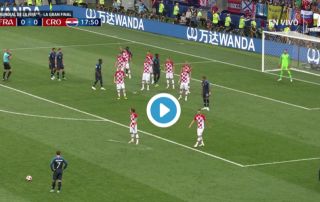 France took the lead against Croatia in the 2018 World Cup final, after Mario Mandzukic headed the ball into his own net from an Antoine Griezmann free-kick.

The free-kick came after the Atletico Madrid striker was fouled just outside the area, with Juventus’ Mandzukic getting the final flick on to send the ball past Danijel Subasic in the Croatia goal.

The goal now means that France have taken a big step towards claiming their first world title since 1998 where they beat Brazil in the final in Paris 3-0.

Here’s a clip of the goal, one that we’re sure Mandzukic won’t be wanting to watch after the match is over!

#Mandzukic own goal and France lead 1-0 in the final! #WorldCupFinal pic.twitter.com/kWIXI72USr

OWN GOAL! Griezmann delivers the ball 30-yards from goal. In a desperate attempt to get something on it Mandzukic flicks the ball into his own net pic.twitter.com/2HyfY4RHGO