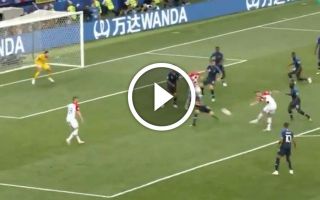 Croatia fell behind in the World Cup final to France despite making a positive start, but Ivan Perisic ensured that they hit back quickly enough to draw level.

An own goal from Mario Mandzukic gave the French an early lead, adding to the frustration for Croatia after they had made the brighter start of the two sides.

In turn, it would have been a major setback for Zlatko Dalic’s men, but they struck back with real quality as Inter forward Perisic kept his composure after finding space in the box to hammer home an equaliser.

It was a top finish from the winger who has gradually become more and more decisive for Croatia as the tournament has gone on. He’ll certainly be a popular teammate for Mandzukic having spared his blushes by giving Croatia a route back into the game.

However, their comeback didn’t last too long as Antoine Griezmann converted from the penalty spot to restore France’s lead before the half-time whistle.

GOAL! After the ball bounces around France’s box, it falls for Perisic who takes one touch away from the defender before rifling a left-footed strike past Lloris pic.twitter.com/F5AzIpHUYn