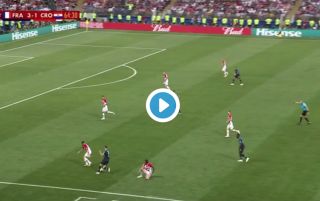 Kylian Mbappe scored an absolutely insane strike against Croatia this evening to all but wrap up the World Cup final for France.

The PSG star’s strike mad it 4-1 to Les Bleus, with Mario Mandzukic scoring for Croatia just a few minutes later to make it 4-2.

The player now joins Pele as the only teenagers ever to score in a World Cup final. He’s definitely in good company!