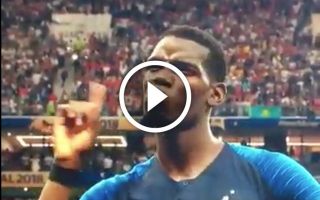 Paul Pogba played a fundamental role for France as they sealed World Cup glory in Moscow on Sunday, and he certainly let his critics know about it.

As noted by The Guardian, the Man Utd star has had to put up with a significant amount of criticism over the last year in particular due to his performances at club level, while the Daily Post report on Gary Neville’s explanation as to why he’s so often the target for those outside of Old Trafford.

After establishing himself as one of the best midfielders in Europe during his stint with Juventus, perhaps his inability to consistently deliver at United coupled with his price-tag have opened the door for the criticism.

Nevertheless, he proved his worth for France this summer as he played a crucial role in their run to the World Cup final before scoring in the 4-2 win over Croatia to lift the trophy.

He’ll undoubtedly hope to build on that success now and deliver his best performances on a consistent basis for the Red Devils, but as seen in the video below, he seemingly had a message for his critics and detractors as he appeared to suggest that they must now be silent and talk less.

It remains to be seen whether or not he continues to face intense scrutiny moving forward, but with a string of honours at club level and now with a World Cup winners medal to boast, the 25-year-old certainly hasn’t done too badly in his career thus far.

Paul Pogba to all his critics. Tell em Paul. ?????? pic.twitter.com/UZ6JCEhnXn