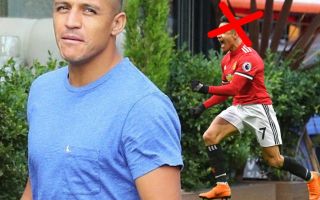 Manchester United star Alexis Sanchez was spotted in Cheshire on Sunday and his appearance was a talking point on Twitter.

The former Arsenal playmaker was dressed in a blue tee-shirt and white shorts but it was his shaved head that really caught the eye.

Sanchez appears to have ditched his trademark floppy top ahead of the new season and decided that the age of 29 is the right time for a buzz cut… although one fan commented that he now looks 60!

It was reported by the Mail Online, who posted pictures of Sanchez, that the United ace did not travel to Los Angeles with the rest of the United squad on Sunday.

The Mail also claimed that Daley Blind was left out as he is close to sealing a transfer to Dutch club Ajax.

But there was no suggestion that Sanchez’s absence from United’s travelling party had anything to do with a possible summer move.

First a full summer of rest and now a cold blooded haircut. Vintage killer Alexis is returning to the league next season. At least 35 G+A from the main man next season. pic.twitter.com/DCusudz4ed

Omgggggg he cut his hair , 16/17 Alexis Sanchez is coming back ffs https://t.co/yMAOlpoTb4