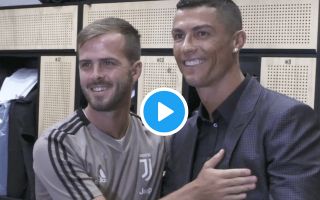 Cristiano Ronaldo is hours away from being officially unveiled by Juventus, as he’s had a busy day settling into his new surroundings in Turin.

As confirmed by the Bianconeri in an official statement last week, they’ve secured the signing of the Portuguese superstar in a deal worth in excess of €100m as they’ve prised him away from Real Madrid.

SEE MORE: Photo: Cristiano Ronaldo joined by Georgina Rodriguez as he lands in Turin ahead of Juventus unveiling

Now, the excitement is building as ahead of being paraded in front of the fans after his medical is completed and the formalities of his move are concluded, Ronaldo has been busy meeting his new teammates.

Miralem Pjanic looked delighted as did Giorgio Chiellini as the Turin giants look set to continue to dominate domestically while now having a great opportunity in the Champions League given Ronaldo’s pedigree and winning record in the competition.

Perhaps the most excited and delighted man at the training centre though was Massimiliano Allegri, as the Italian tactician visibly looks likes he’s relishing the opportunity to coach Ronaldo and is fully aware of just how much stronger his squad has become this summer.

Ronaldo is expected to be unveiled on Monday evening, but as seen in the video below, the 33-year-old is undoubtedly making himself at home already as he embarks on a new chapter in his trophy-laden career.

Time for @Cristiano to meet his new teammates! ??#CR7DAY pic.twitter.com/BCMCZen2aO