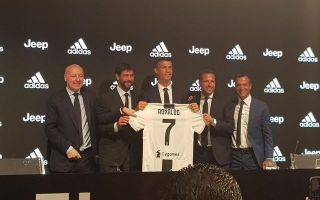 Cristiano Ronaldo addressed the media on Monday as he was officially unveiled by Juventus after his transfer from Real Madrid.

The 33-year-old superstar will now embark on a new challenge in his career after a trophy-laden stint in Spain, with the Turin giants hoping he can help maintain their domestic dominance while also ending their agonising wait for success in Europe.

After bagging 44 goals in 44 appearances last season, there doesn’t seem to any immediate sign of decline in the 33-year-old, but it remains to be seen how he adjusts and acclimatises to Serie A and Italy as it will present a different challenge for him.

Nevertheless, in terms of making the decision to leave the Bernabeu and choosing Juventus to start this next chapter, Ronaldo insisted that it was an easy choice to make as ultimately he envisages enjoying plenty more success in the latter stages of his career and wants to continue to challenge himself at the highest level.

“It’s a big challenge in my career, a lot of players my age choose to go elsewhere with all due respect. It makes me happy to play at such a big club, I‘m very grateful to Juventus for this opportunity.”

Meanwhile, he was also asked about the reception he received when visiting Juventus as a Real Madrid player last season, as he scored a sensational overhead kick goal in Turin which earned him a standing ovation from the home crowd.

It seems as though that did leave a lasting impression on him, as he thanked the Juve faithful for their adulation as he now looks to score goals in the famous black and white jersey moving forward.

“The standing ovation I received here at the Allianz was a spectacular moment for me. The fans gave me a wonderful welcome here and I thank them all.”

After his World Cup exploits, it’s likely that Ronaldo will be afforded more time off to recuperate, but having now wrapped up the formalities of his move to Juventus, he’ll be raring to go to start the new campaign with his new teammates.