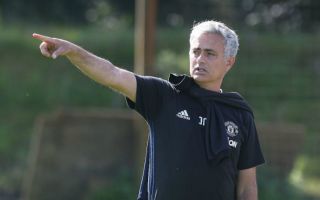 Manchester United manager Jose Mourinho and his staff have been left ‘astounded’ and impressed by Luke Shaw’s improved fitness levels after he smashed fitness tests in pre-season training.

While the England international was not always a regular in the starting line up last season and has had his difficulties under Mourinho, it now seems he’s back in the manager’s good books, according to the Metro.

As the report explains, some photos had emerged of Shaw looking a little overweight over the summer, but he’s now in great shape and wowing everyone with his fitness levels ahead of the new season.

With Ashley Young perhaps likely to return late to the squad after reaching the World Cup semi-finals with England, this could present Shaw with an opportunity to establish himself as first choice in the new campaign.

It has previously been claimed by the Manchester Evening News that the 23-year-old has been given assurances over his future, with Mourinho dropping interest in signing a new left-back.

Back to work 😁 #MUFC

Now into the final year of his contract, the MEN’s report explains that Shaw could look to leave on a free next summer if his situation in United’s first-team does not improve by then.

If the Metro’s report is anything to go by, it looks like the former Southampton youngster is doing everything he can to impress and fight for his place.