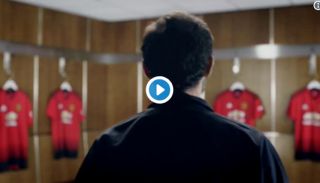 Manchester United have released a video on their official Twitter page to unveil their 2018/19 home kit.

In a design with black stripes near the bottom of the shirt, the club claim this latest effort from Adidas has been inspired by the Railway Men of Newton Heath.

United were formed in that area of Manchester after starting out as the Newton Heath Lancashire and Yorkshire Railway club.

We’re not quite sure how that links in with this latest kit, but it’s a pretty nice design nevertheless!