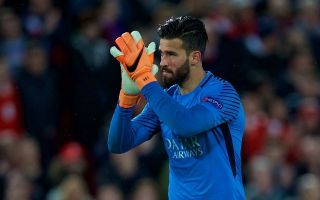 It’s being claimed that Liverpool have agreed a deal to sign Roma goalkeeper Alisson and that it’s too late for Chelsea to hijack the transfer.

Chris Bascombe of the Daily Telegraph has tweeted that the Brazil international has now been given permission to speak with Liverpool as they met the club’s asking price, in what would be a world-record fee for a goalkeeper.

LFC have now agreed deal worth £67m with Roma for Alisson. Up to the player now. He has permission to speak to LFC.

BBC Sport currently have Manchester City ‘keeper Ederson as the most expensive of all time in his position (in sterling), but Alisson looks set to smash that by some way if he moves to Anfield.

While Bascombe has tweeted an update from Liverpool’s end, Evening Standard journalist Simon Johnson adds that it looks to be too late for Chelsea to come in for Alisson now as the 25-year-old’s move to Merseyside is nearly done.

From what I'm hearing, even if #cfc came in with a late bid now, it's too late. deal almost done with #lfc https://t.co/DHqHeCLBi8

This also goes in line with what the Guardian reported earlier today, with their report suggesting Liverpool were ahead of Chelsea and planning a medical for Alisson to finalise his transfer to the club.

Given that LFC were so strong in attack but weak in defence last season, this looks a superb piece of business by Jurgen Klopp if they can get the deal over the line.

With Virgil van Dijk also signing in a big-money deal in January, Liverpool now look far stronger at the back and a more well-balanced side that could be a real threat in both the Premier League and in Europe in 2018/19.