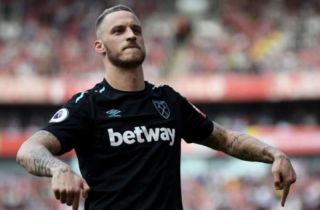 Manchester United target Marko Arnautovic looks set to leave West Ham this summer, as the club is reportedly ready to listen to offers for their former record signing.

According to talkSPORT, The Red Devils are believed to be interested in acquiring the 6ft 2in striker as they look to increase their attacking options ahead of the new season. The 29-year-old moved to The London Stadium last summer for £25 million from Premier League rivals Stoke City – per BBC Sport.

After a subdued start, the Austrian hitman, who can play as a winger as well as upfront, enjoyed an impressive second half of last season under then manager David Moyes, finishing the campaign with 11 goals from 31 appearances.

West Ham have been busy in the transfer window so far, bringing in 7 new players – including, as reported by BBC Sport, new £36 million record signing Felipe Anderson from Lazio – as new boss Manuel Pelligrini looks to revamp the squad.

The sale of Arnautovic could help the London club balance the books if United come calling with a large enough bid.

West Ham could be beaten by Tottenham to signing of £16m-rated Championship star August 6, 2020 11:15
Tottenham FC