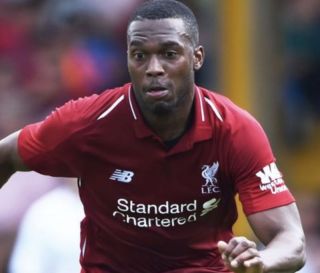 Liverpool forward Daniel Sturridge insists that he wants to stay at Anfield to prove himself to manager Jurgen Klopp after returning from West Brom.

The England international spent the second half of the 2017/18 season on loan with west midlands side West Bromwich Albion, but the 28- year-old is determined to force his way back into Liverpool’s starting XI.

The Daily Mail reports that Sturridge has enjoyed a prominent role with the team so far in pre-season, featuring in all 3 of their friendly games so far and he is expected to continue in the side for their upcoming tour in the US.

“Pre-season is going well, so for me it’s keeping my head down and building on that.” ?@DanielSturridge determined to reclaim place in #LFC team: https://t.co/nMRdgSeYN9 pic.twitter.com/RUqg6Omhvx

According to The Mirror, the striker has been linked with a move to Besiktas during the current transfer window, but he is adamant that his immediate future remains on Merseyside.

SEE ALSO: Liverpool could have stiff competition from Sevilla for World Cup star

Speaking to the Mirror, Sturridge stated: “I see myself staying at Liverpool, hopefully being part of the team week in, week out,”

“Pre-season is going well, so for me it’s keeping my head down and building on that. I’m excited about the season ahead and it feels great to be back.”

The former Chelsea man left the bridge for Liverpool back in 2013 and despite a promising start has been unable to consistently hold down a place in the side, usually due to fitness issues and serious injury.

But having scored 48 goals for the club in 98 appearances, Klopp may yet give Sturridge one last shot at the big time as The Reds look to challenge on all fronts next year.