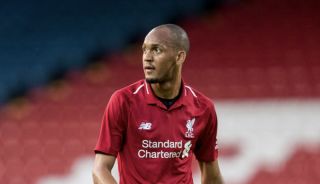 One of Liverpool’s latest summer signings, Fabinho, has suggested that the club should move for French World Cup superstar Kylian Mbappe.

Mbappe was one of the players of the tournament for his performances in Russia as France powered their way to their second World Cup triumph, defeating Croatia 4-2 in the final. The 19-year-old winger scored in the final to cap a wonderful individual tournament which has cemented his position as the hottest property in European football.

Currently plying his trade in Ligue 1 with PSG, Mbappe moved to the Parisian giants from AS Monaco last September – as per The Independent – for £166 million and his value has only increased since then.

Liverpool’s current record signing is Virgil Van Dijk, who moved to Anfield in January for £75 million, as reported by The Liverpool Echo.

The Reds would have to more than double that record in order to secure the Frenchman’s services, However, their new Brazilian signing Fabinho hopes he can be convinced to move to the Premier League.

“He [Mbappe] has already said this season he will remain at PSG, but I still try slowly to convince him to come over,” said the 24-year-old, according to Sky Sports.

“What France did was fantastic. What Mbappe did in two years of professional football is amazing. He is a phenomenon and needs to be congratulated, and as soon as I have the chance I will.”