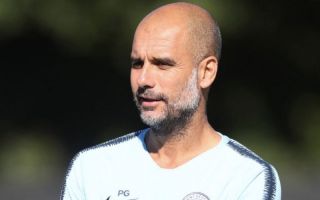 Manchester City boss Pep Guardiola has refused to rule out keeping Joe Hart at the club following his return after a loan spell at West Ham United.

Since the Spanish boss took the helm at the club Hart has found himself frozen out and also spent one year on loan in Italy with Serie A outfit Torino.

Guardiola publicly announced in 2016 that the England goalkeeper was not a part of plans and replaced him swiftly with ex-Barcelona shot-stopper Claudio Bravo. However, Hart has been included in City’s pre-season squad for their tour of the US and his manager has been quick to praise his professionalism.

“We’re going to try and make a solution for Joe but if not, then he is with us,” said Guardiola, according to Sky Sports. “He’s one of the best professionals I’ve ever seen but at this moment, he is with us.”

The 31-year-old has made 266 appearances for the Manchester City during a 12-year spell and was ever present in between the sticks for the club’s first two Premier League title-winning campaigns, earning him legendary status.

City kick off their International Champions Cup pre-season tournament campaign on Saturday against Borussia Dortmund in Chicago at Soldier Field.