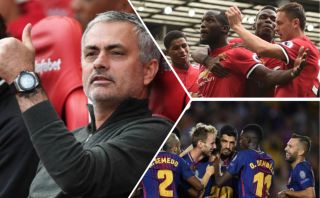 Jose Mourinho is willing to see Paul Pogba leave Man United and join Barcelona this summer as long as a deal for the player includes Blaugrana star Ivan Rakitic.

This is being reported by Don Balon, who state that the Spanish giants are very keen on the Frenchman, and that Mourinho himself would be willing to let the player leave Old Trafford.

The same report also notes that Mourinho wants Rakitic to be included in Barca’s offer for Pogba, and that the Catalan giants aren’t completely against the idea.

Rakitic has been a key part of Barcelona’s side these last few seasons, with the Croatian often coming up trumps when Barca need him the most.

The former Sevilla star played the most games out of any Barca player this season just gone, and has found himself a cemented role in Ernesto Valverde’s starting XI.

Despite this, swapping him for Pogba would be fantastic business, as not only is the Frenchman a fair few years younger, but he also has what it takes to become a superstar at the Camp Nou.

The club would’ve found their replacement for Andres Iniesta by signing Pogba, and it may very well help the club knock Real Madrid off their perch and become champions of Europe once again.