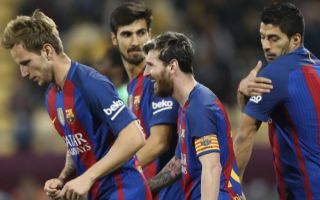 Barcelona seems to be upping their efforts to find a way to fill the void left by Andres Iniesta this summer, and it looks like the club have a certain Juventus star in their sights.

The Spaniard was one of the club’s best players last season as he helped them win their third league and cup double in the past four seasons.

Now, the club seem to have made a serious attempt to bolster the quality of options they have in midfield ahead of the new season.

Don Balon note that Ernesto Valverde’s side have tabled a bid of €50M plus star Andre Gomes for Juventus’s Miralem Pjanic.

Pjanic is a wanted man in Barcelona, with the club upping their effort to sign the Bosnian

Don Balon have also reported in the past that Lionel Messi wants to see his side sign the Bosnian international, and it looks as if the club have listened to the Argentine’s pleas.

Losing Gomes in return for Pjanic would be a great deal for the Blaugrana, as the Portuguese star has been very disappointing since his move from Valencia two summers ago.

The midfielder has tried and failed to hold down a starting place at the Nou Camp, and such has often been made to watch on from the sidelines.

The player managed to make 16 appearances in the league last season, however these only saw the player clock up a measly 628 minutes, with Gomes failing to register a goal or an assist in that time.

The former Los Che star has been one of the club’s worst signings in recent memory, and we’re sure Barca fans wouldn’t be sad to see him leave if it meant that it would help their side bring Pjanic to Catalonia this summer.