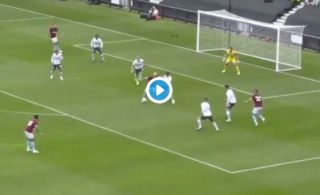 Manchester United fans who scoffed at links with West Ham forward Marko Arnautovic might want to take another look at the player, starting with this goal video below.

The Austria international has several times been linked with United this summer, though he’s not the biggest name and many Red Devils supporters would likely expect something a bit more ambitious from their club.

MORE: Manchester United star to go against club’s wishes and push for exit before the transfer deadline

However, Arnautovic has shown his quality time and time again in the Premier League, and he netted an absolute beauty in pre-season as United rumours have resurfaced in the last few days from talkSPORT.

The Daily Mirror have previously suggested West Ham would want around £60million for him, but having spent big this summer, it may be that they could now do with offloading some big names.

Anyway, this clip shows why the 29-year-old could be a valuable asset for bigger clubs, as he turns and shoots expertly into the corner despite being surrounded by defenders in the box.