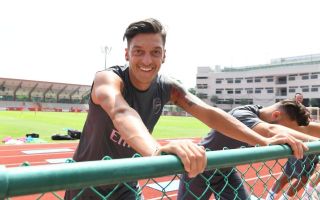 Arsenal have sent a classy little welcome back message to Mesut Ozil after the German filled the headlines for all the wrong reasons yesterday.

The 29-year-old had a frustrating World Cup with the German national team as they crashed out at the group stages, with the Gunners playmaker barely making any impact at the tournament.

Ozil has since appeared to signal his retirement from international duty in a lengthy statement posted on his social media pages regarding his Turkish ancestry and the attitude immigrants such as himself face from the media.

Far from weighing in on the debate, Arsenal have simply sent a nice tweet welcoming Ozil back to pre-season training as he prepares for the 2018/19 campaign at the Emirates Stadium.

Ozil says he feels he has been the victim of racism and that he is German when he plays well, but Turkish when he doesn’t, in the eyes of some in his country.

Whatever one feels about the former Real Madrid man posing with Turkish president Tayyip Erdogan, who remains a controversial figure, it certainly seems fair for Ozil to hit out at discrimination when he sees it, and take a stand over representing his country if he is not made to feel welcome.

Ozil played a key part in Joachim Low’s side winning the 2014 World Cup, but Bayern president and Germany legend Uli Hoeness slammed the player’s performances since then in a response to his retirement statement.

‘I am glad that this scare is now over. He had been playing s*** for years. He last won a tackle before the 2014 World Cup. And now he and his s***** performance hide beyond this picture,’ Hoeness told Bild.