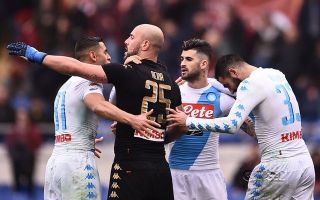 Amid ongoing doubts over the future of Thibaut Courtois, Chelsea are being linked with the £9m signing of AC Milan goalkeeper Pepe Reina.

The Spaniard only joined the Rossoneri on a free transfer from Napoli earlier this summer, and has since reported for duty and travelled with the squad to the US for the International Champions Cup.

In turn, he is merely at the start of his journey with his new club, but it’s claimed that he could be set for an exit already with Milan reportedly offered an opportunity to make a quick profit on the veteran shot-stopper.

According to The Sun, Chelsea are said to be edging closer to agreeing a £9m deal for the 35-year-old, while it’s added that the player himself is keen on the idea of linking up with Sarri again.

Although the pair couldn’t help mastermind an end to Napoli’s wait for major trophies, they certainly helped build a strong side that continued to compete with Juventus for the Serie A title over the past two seasons.

Given his experience and reliability at a high level, it’s no surprise that Reina is being targeted as Sarri will be fully aware of what he is capable of offering.

Further, as noted by Marca, with Courtois continuing to be linked with a move to Real Madrid this summer, it could be crucial for Sarri to bring in a new goalkeeper to fill the possible void left behind by the Belgian international.

Albeit perhaps a more short-term option given his age, Reina would certainly be capable of offering that solution as he also of course boasts previous experience in the Premier League from his time with Liverpool.

With that in mind, perhaps the move works for all parties. However, as seen in the image below, the Spaniard has just arrived in Los Angeles with the Milan squad and so doesn’t appear to be on the verge of an imminent move.