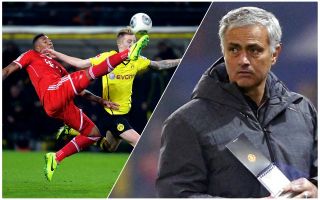 The Bayern Munich and Germany centre-back is the latest defender to be linked with Manchester United as the club reportedly makes initial contact.

Boateng looks set to leave the German champions this summer and according to Talk Sport, Old Trafford could be his next destination.

Talk Sport reports German Magazine Kicker has stated that United have contacted Bayern representatives to make an ‘initial exploration’ over the possibility of a deal for the 30-year-old.

Kicker also reports that Boateng would apparently command a fee of around €60million and that he is also subject to interest from French Champions Paris Saint Germain.

The 6ft 4in defender endured a miserable World Cup campaign with Germany this summer in Russia, playing far below his usual high level as the team slumped to an early Group Stage exit.

However, Jose Mourinho is on the lookout for a new centre-back and Boateng has the experience of playing at the highest level and marshalling defences that the Portuguese boss is after.

The Manchester Evening News also links United with an interest in other big-name centre-backs such as Marquinhos and Toby Alderweireld.