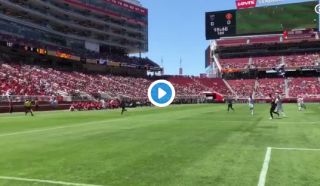 Manchester United left-back Luke Shaw was rather humiliated in this video clip below from the club’s latest friendly match.

Brilliantly nutmegged by San Jose Earthquakes winger Nick Lima, Shaw was left rather red faced with a sloppy effort at defending on his side of the pitch.

The Metro recently claimed United staff and manager Jose Mourinho were hugely impressed by Shaw in pre-season training so far, but this was far from his best moment.

This follows the Manchester Evening News claiming the England international is set to be given the chance to earn his manager’s trust this season after a difficult couple of years.

STOP IT. ?@nick__lima gets the crowd off its feet with a meg on the sideline! ?#WeAreSanJose | #MUFC pic.twitter.com/a8ZVYRkwmd