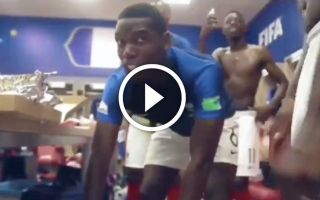 As the dust settles on France’s World Cup triumph this summer, Paul Pogba has offered a little more insight into the celebrations that took place.

Didier Deschamps and his men secured a 4-2 win over Croatia in the final in Moscow earlier this month, repeating their success in 1998 to be crowned champions for the second time.

As seen in other videos on their return to Paris, there were wild celebrations from the players and fans alike, with Pogba also leading the way by getting chants going to ensure his teammates received plenty of praise.

However, the video below shows the closeness and camaraderie within the France group as Pogba goes through his teammates one by one and gives them a shout out in the immediate aftermath of their achievement while in the dressing room in Russia.

N’Golo Kante, Hugo Lloris, Raphael Varane and Pogba himself are all mentioned and he’ll now be hoping to repeat these scenes at the end of the domestic season with Man Utd come next May…