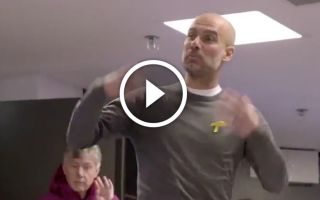 Following on from Juventus and their Netflix documentary series, Man City are set to release their own on Amazon Prime as they’ve released a teaser for it on Twitter.

The Premier League champions enjoyed a successful season last year, with Pep Guardiola leading them to the league title and League Cup to claim his first pieces of silverware in England.

SEE MORE: Manchester City lead chase for £89million transfer after being beaten by Chelsea to Jorginho

While they dazzled for the most part and finished a staggering 19 points above their nearest title rivals, it wasn’t all straight-forward as seen in the video below taken from their upcoming documentary which appears to follow their journey last season.

Guardiola is heard tearing into his players as he insists that although he will defend them to the media, he will tell them the truth in the dressing room and isn’t afraid of them being angry with him provided that they channel it the right way and give it everything on the pitch.

It seems questionable at first, but it turns out to be a pretty inspirational speech as it would seemingly fire the players up to go on and enjoy the success that they secured last year.

Many will consider it a fascinating insight into how the Spanish tactician works and gets the best of his players. In turn, the documentary will perhaps prove to be very popular beyond the City faithful when it’s released next month.

“We have to fight for everything that we are…”

All or Nothing: Manchester City. Coming to @primevideo 17 August #mancity pic.twitter.com/hZiHoFuRAr