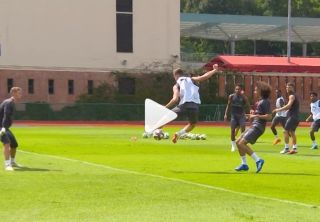 Arsenal defender Rob Holding has posted a video clip on his Instagram page of a superb goal he scored in training.

The 22-year-old is a highly rated talent at the Emirates Stadium after showing plenty of potential in his two seasons with the club, though he remains just on the fringes of a regular place in the first-team.

Holding may also find himself even further down the pecking order with the summer signing of Sokratis Papastathopoulos in defence, but he’s shown Unai Emery what he can do in the goal video clip below:

Of course, scoring cheeky flicked volleys like this is not really Holding’s job, but everyone loves a centre-back who can contribute something going forward as well!