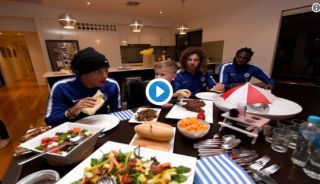 Chelsea star David Luiz made a young fan’s dream come true with a visit to his home alongside Tiemoue Bakayoko and Ethan Ampadu.

Watch the video below as the Brazilian shows what a genuinely great bloke he is by playing football with the kid in his garden and promising to dedicate his next goal to him with a special celebration of his choice.

As well as all that, Luiz took the opportunity to poke a bit of fun at Chelsea coach Gianfranco Zola.

Seeing that the family had a Zola 25 shirt on their wall, Luiz checked to see if they knew the Italian legend was now back at the club as a coach, before saying he was about as tall as the little boy!

This is a truly heartwarming video as Luiz shows how comfortable and down to earth he is by spending time with a young supporter who probably never dreamed he’d get such an opportunity.