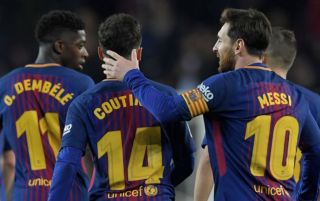 Barcelona starlet Ousmane Dembele is reportedly angered by his club’s pursuit of the Willian transfer from Chelsea this summer.

The Brazil international has been strongly linked with Barca for some time now, with Don Balon claiming a deal could be done at €65million, much to Dembele’s frustration.

Willian has shone at Chelsea and could be an ideal signing for Barcelona to strengthen in attack, with Dembele certainly far from convincing in his first season at the Nou Camp.

Despite arriving from Borussia Dortmund as one of the most highly rated young players in the world, the France international had his problems with fitness and form in his first year in La Liga.

Willian transfer rumours have dominated the headlines of late

It remains to be seen if Dembele is right to be concerned that Willian could block his path to the first XI even more, but it certainly seems likely to pan out that way.

The 21-year-old would probably not be short of suitors around Europe if he were to leave Barcelona, but it would also be a big blow for him to leave such a big club after having just one season to make a stab of being a success with them.