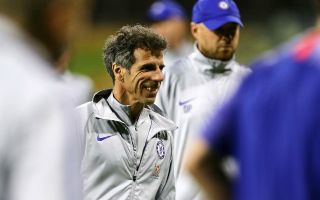 The 17-year-old has impressed in pre-season so far and is now set to be offered a new deal and a role in Maurizio Sarri’s first-team this season, according to Goal.

It’s suggested that Zola played a big part in Chelsea offering the youngster this new contract, which should be exciting for Blues supporters as they embark upon a new era at the club.

CFC have long had some top young players coming through their academy, but it’s been rare for managers to show their faith in them.

Now, however, with club legend Zola back at Stamford Bridge, it seems there could be a stronger connection with the homegrown talent coming through at the club.

Hudson-Odoi looks a hugely impressive talent and Chelsea fans can take heart from the fact that Zola and Sarri also seem to rate him highly enough to ensure the west Londoners tie him down and give him chances to impress in the senior side.