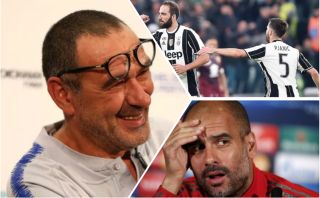 Chelsea have been handed a boost in their pursuit of Juventus midfielder Miralem Pjanic, after Man City boss Pep Guardiola confirmed that his side are not in the running for the player.

As reported by the Daily Star, Guardiola confirmed City are not in for the Bosnian, stating that “he is a top player, but we are not interested in him”, words that will be music to the ears of Chelsea fans.

MORE: £71M Chelsea superstar being eyed up by Juventus as possible replacement for key talisman

As per Don Balon, Chelsea are keen on bringing Pjanic to Stamford Bridge this summer, so Man City denying their interest in him will be a big boost for the Blues.

Don Balon have also stated in the past that the Old Lady want £89M (€100M) if they are to sell the former Roma star this summer, a fair price for a player of his quality.

Chelsea may need some more options in the centre of the park, as their only good options are Cesc Fabregas, N’Golo Kante and Jorginho.

With Maurizio Sarri high-octane pressing style of play, Chelsea’s stars may find themselves tired towards the end of the season, having more options in midfielder looks to be important.

Pjanic would be a great signing for the Blues and would give them a real creative spark in the centre of the park.

It now seems that the club are in the clear to sign the player after Guardiola’s words, something that will be a great thing to hear for all involved with the club.