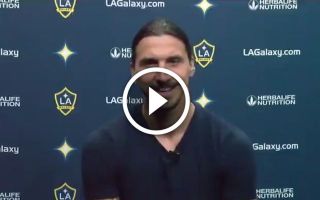 Zlatan Ibrahimovic enjoyed a two-year stint with Man Utd and although he left earlier this year, he’s still showing his loyalty to the club.

The Swede is currently with LA Galaxy, and with NBA superstar LeBron James set to join him in Los Angeles, he was quizzed on an ESPN show about the American’s part-ownership of Liverpool.

After clearing up that he was fully aware of LeBron’s investment in the Merseyside giants, he had the show’s hosts in stitches as he insisted that he was shaking his head in disapproval because Liverpool are “the wrong team”.

Playing for the Red Devils clearly had a positive impact on him and the superstar will have fond memories of playing at Old Trafford. Despite his allegiance being with Galaxy now, it’s clear that he still has loyalty to United and was quick to have a cheeky dig at Liverpool.

Man Utd fans will undoubtedly love this, but the focus will soon switch to matters on the pitch for Jose Mourinho and his men as they look to fend off Liverpool and try to catch rivals Man City in what promises to be an exciting Premier League title race next season.

Zlatan has no time for LeBron James being a part-owner of Liverpool. pic.twitter.com/e3FlE9PPD5